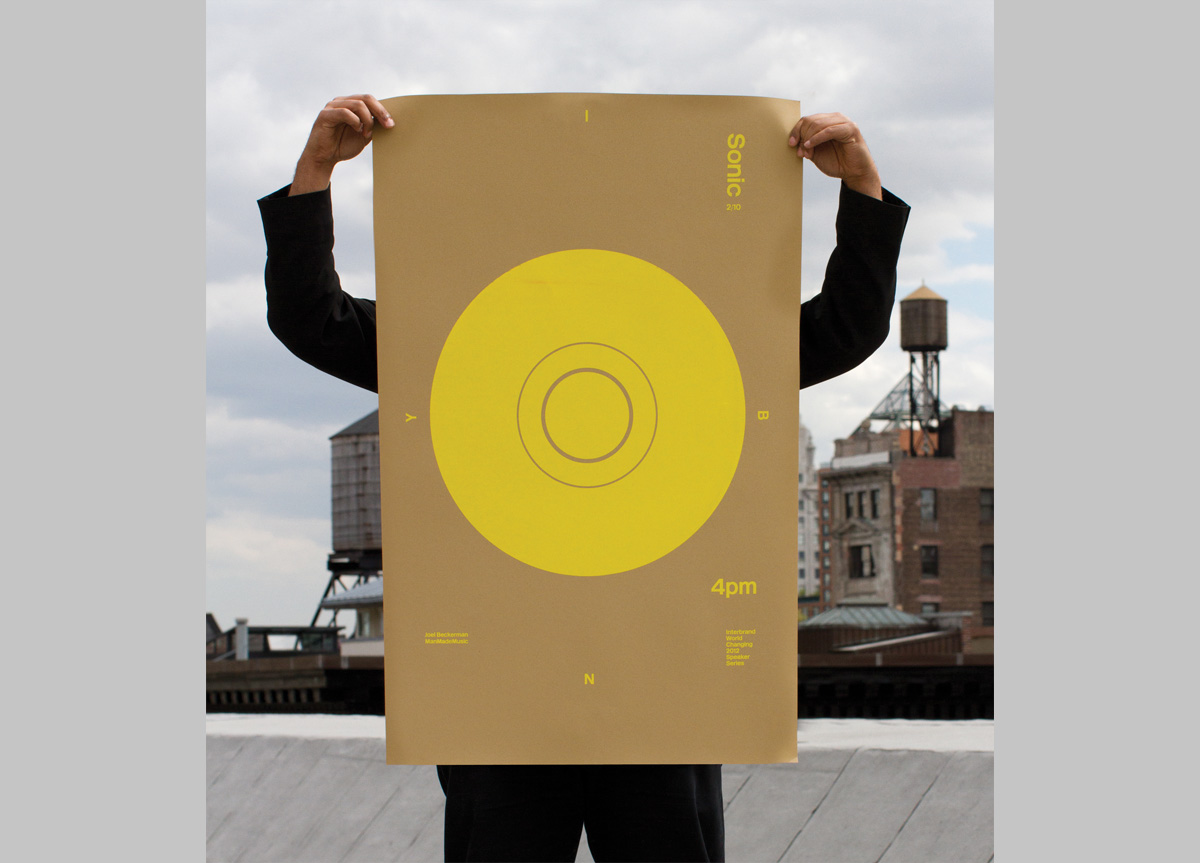 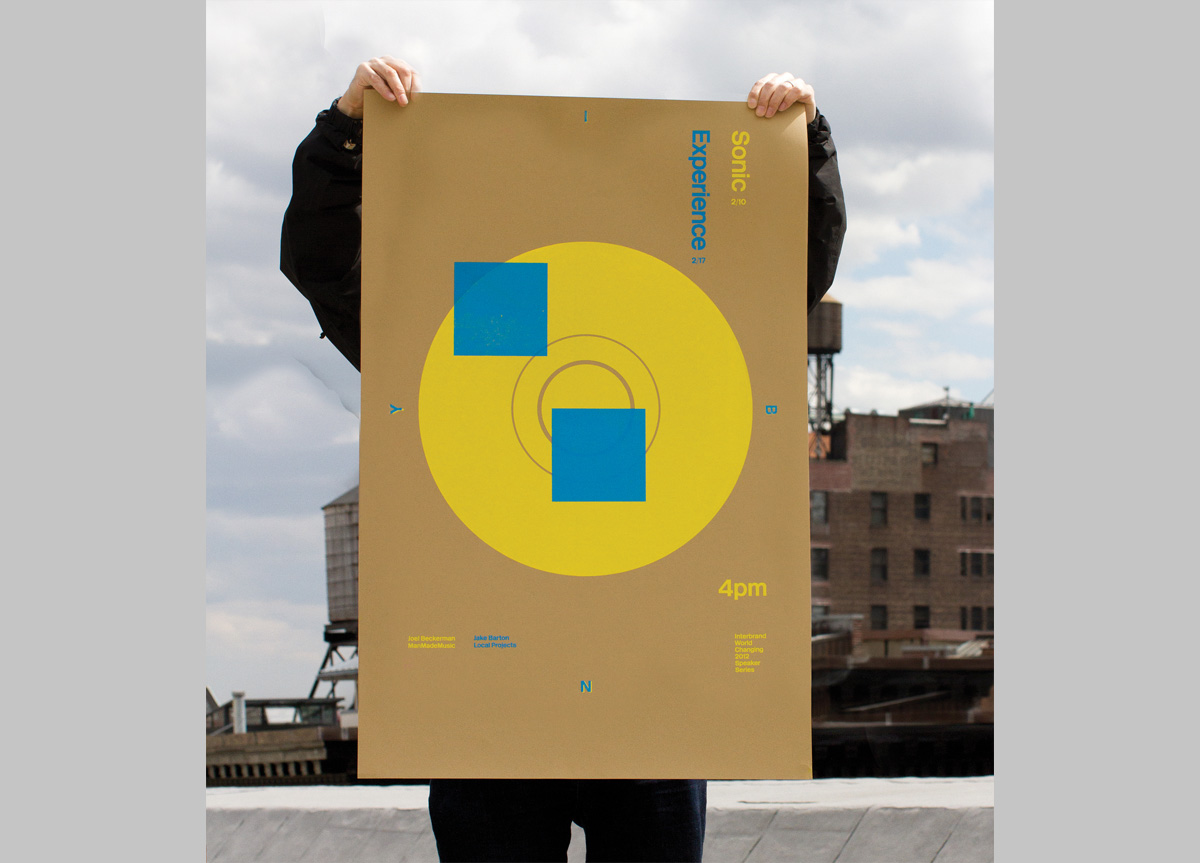 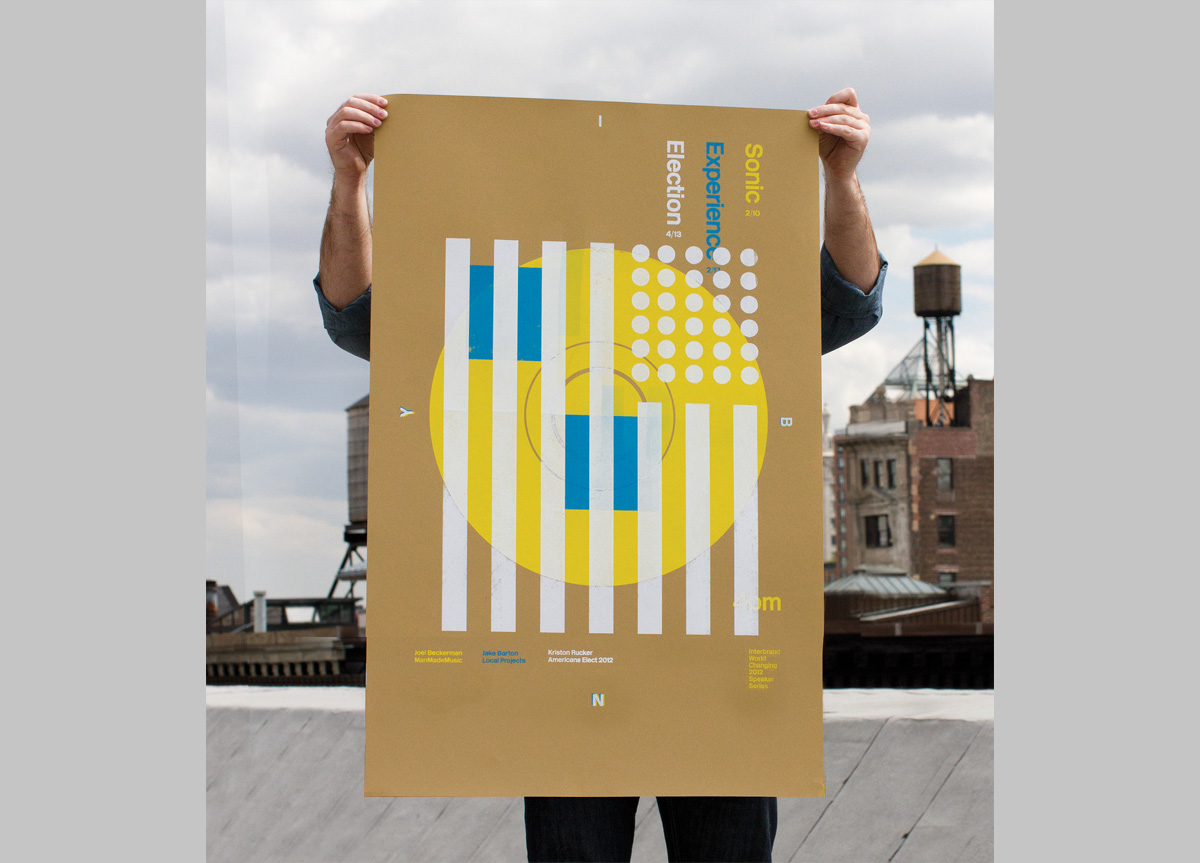 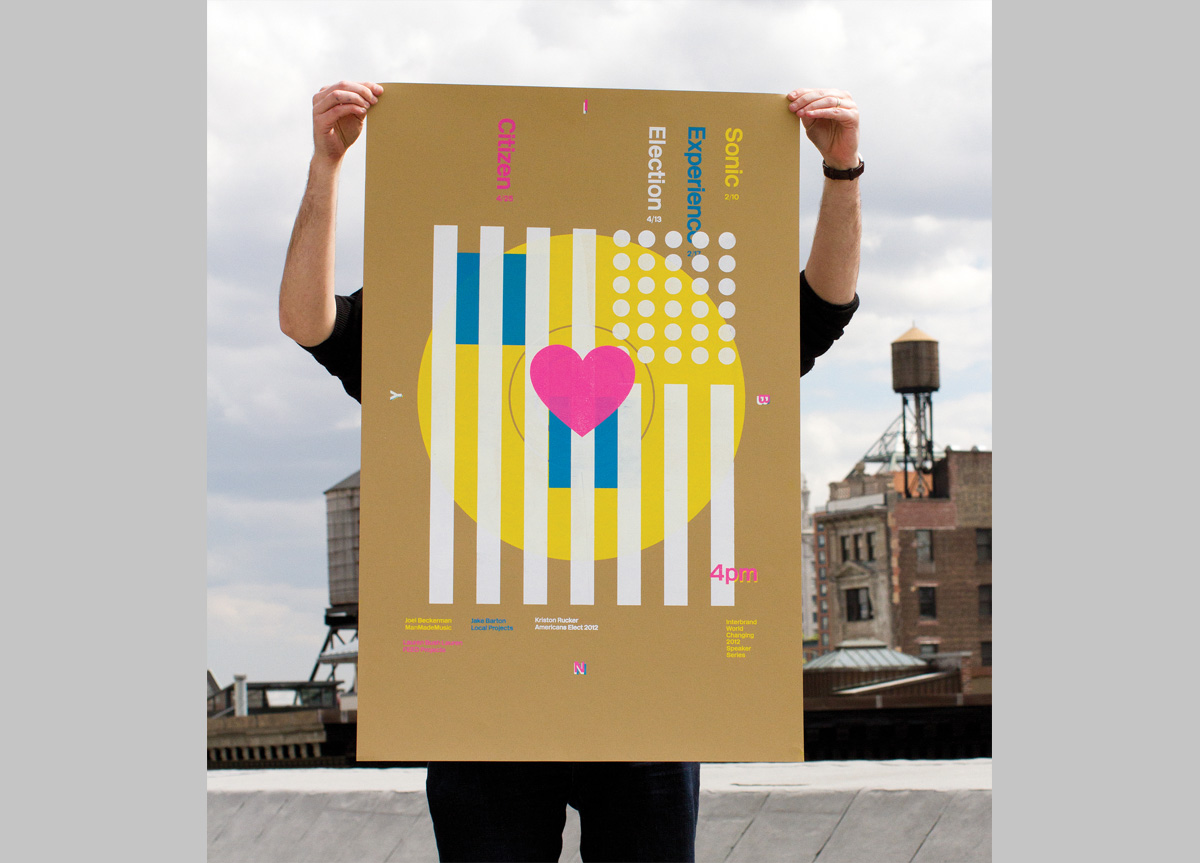 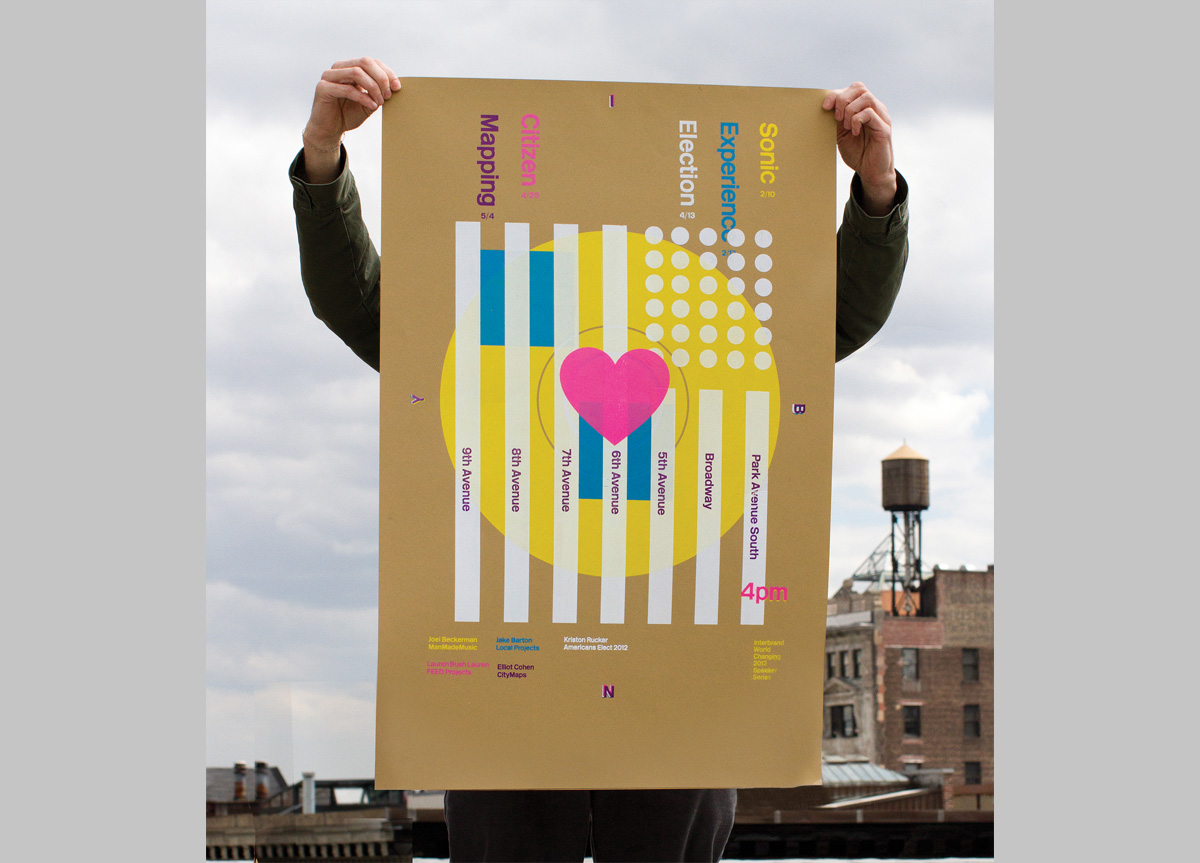 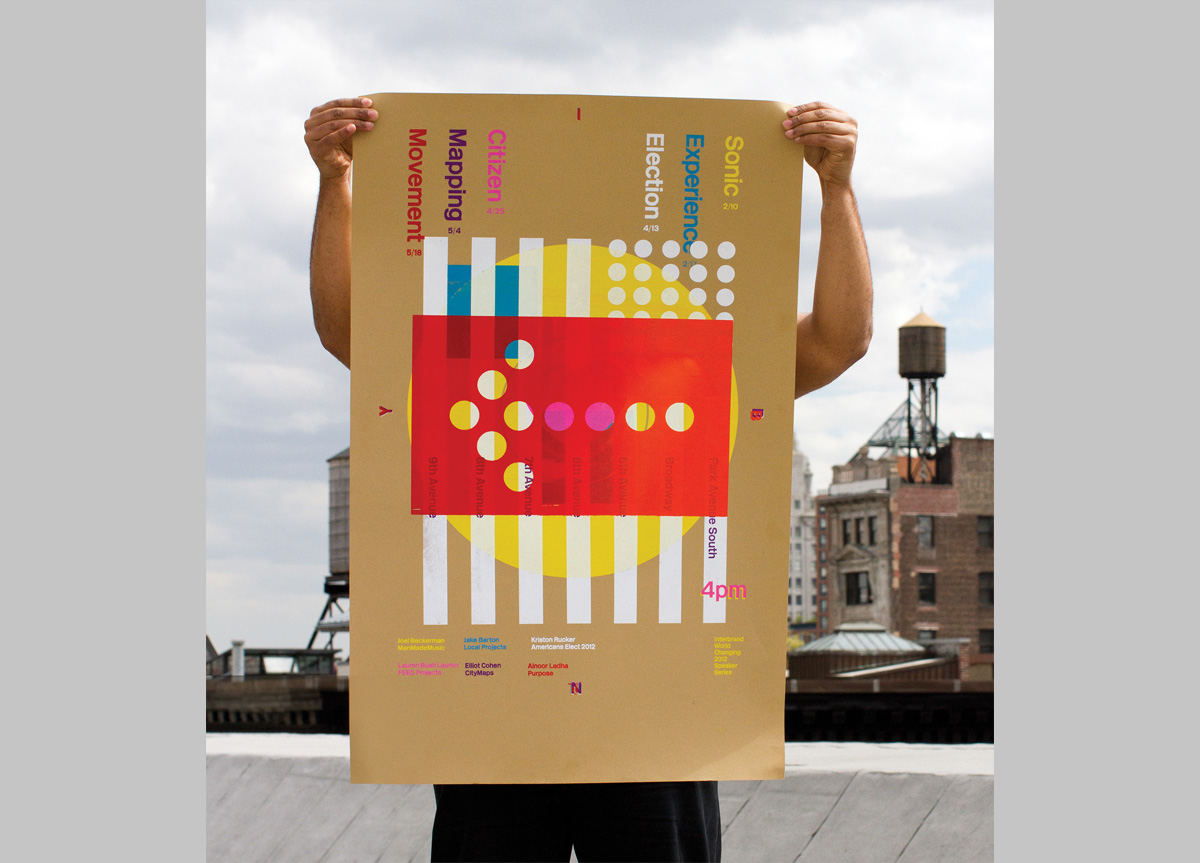 Inter­brand New York is wide and diverse. Strate­gists to design­ers, mar­keters to finan­cial man­agers. They are music junkies, food­ies, and from all cor­ners of the globe. Each depart­ment is iso­lat­ed by their respon­si­bil­i­ties to their clients and ven­dors, but joined togeth­er by a com­mon love for brands.

The World Chang­ing Speak­er Series need­ed a medi­um to mar­ket the event to agency depart­ments, and exter­nal third par­ty providers, with a con­nec­tive thread between the six speak­ers. Keep­ing bud­get and waste in mind, the agency want­ed to offer each speak­er an addi­tion­al ges­ture of appreciation.

We designed a series of six silkscreened posters that evolved over the course of the World Chang­ing Speak­er Series. As a metaphor for the accu­mu­la­tion of knowl­edge, the con­tent for each speak­er’s poster was screened over the pre­vi­ous announcement—creating a col­or­ful arti­fact of the series. The posters first announced each lec­ture, then were pre­sent­ed as lim­it­ed-edi­tion gifts to each speak­er. Made from 100% post con­sumer waste recy­cled paper, the posters used a sixth of the mate­ri­als from tra­di­tion­al process­es and extend­ed the usable lifes­pan of each announce­ment from one week to five months.

As the poster evolved each week, the layering of inks proved to be a challenge. With a finite number of posters, any mistakes or inconsistencies had to be dealt with as happy accidents. The upside of this is that no two posters were ever the same. If we were to do this over, we would have screened double the amount of posters (the set submitted to the FPO Awards is our last set in existence).

Judge’s Comments
I thought that Interbrand’s World Changing Speaker Series posters were an inventive and innovative approach to sustainability. The re-use of a single set of posters and adding additional impressions as the series progressed not only spoke to sustainability but, also was also symbolic of a larger concept—looking back on the building of knowledge. It was a unique blend of concept and execution. Kudos. — David Dodde

This poster series has a really interesting concept—reusing each event’s poster for the next event in the series. So clever! Not only is it a great way to conserve resources, but it represents a cohesiveness within the event series and the layering of ideas and knowledge. brad murph

At first I didn’t know what to think about these large brown posters. They were kind of messy and disheveled from a design point of view, and the silkscreen printing was uneven and out of register. But when I looked closer it dawned on me that this was an additive poster series and what we were looking at was the cumulative effect of a half-dozen posters layered on top of one another. The content for each of six event posters was screened over the previous poster, symbolizing the accumulation of knowledge and the idea of change, as in “World Changing.” It was also a sustainable approach because there were only six posters printed that performed double duty (actually they performed a sextet of purposes). Reams of paper didn’t end up in the dumpster at the conclusion of this event. In the end what won me over, and what always wins me over, is the fact that there was an original idea here. An actual idea—a concept. And that’s a rare and beautiful thing. — DJ Stout