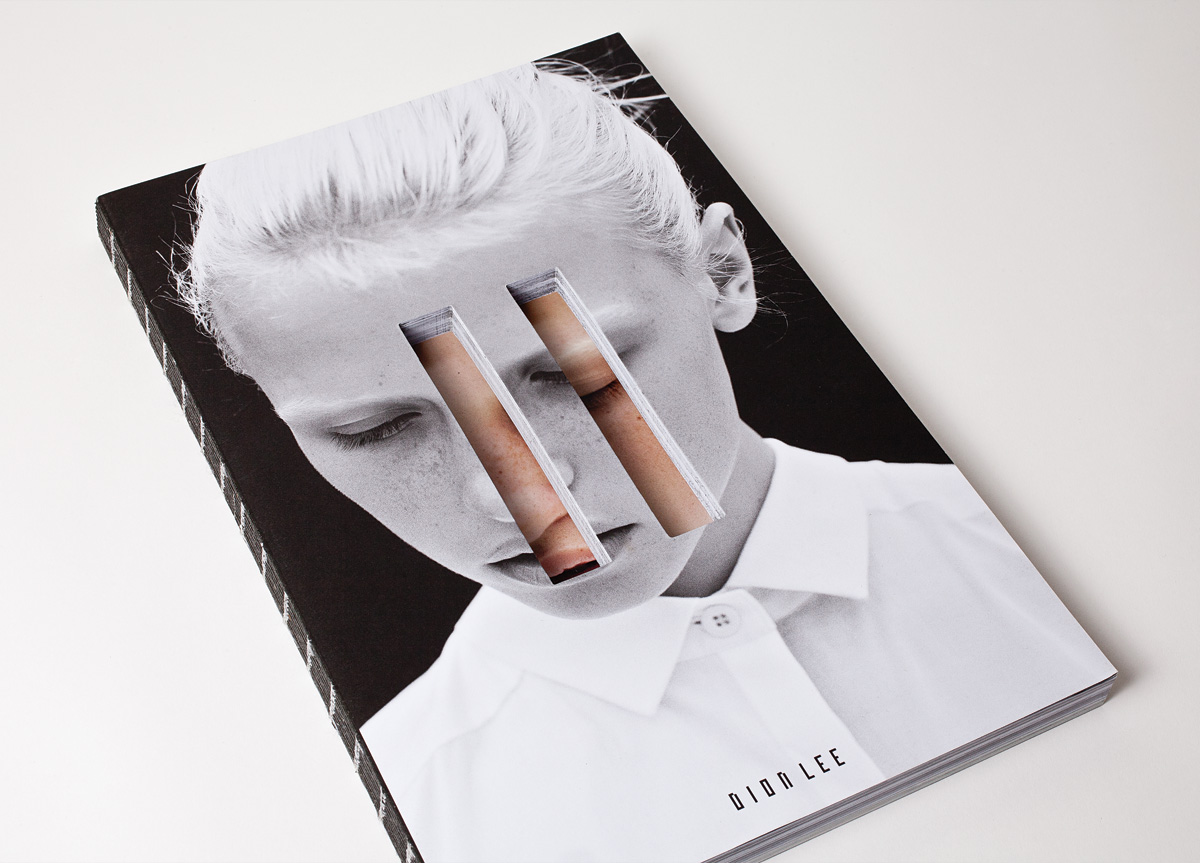 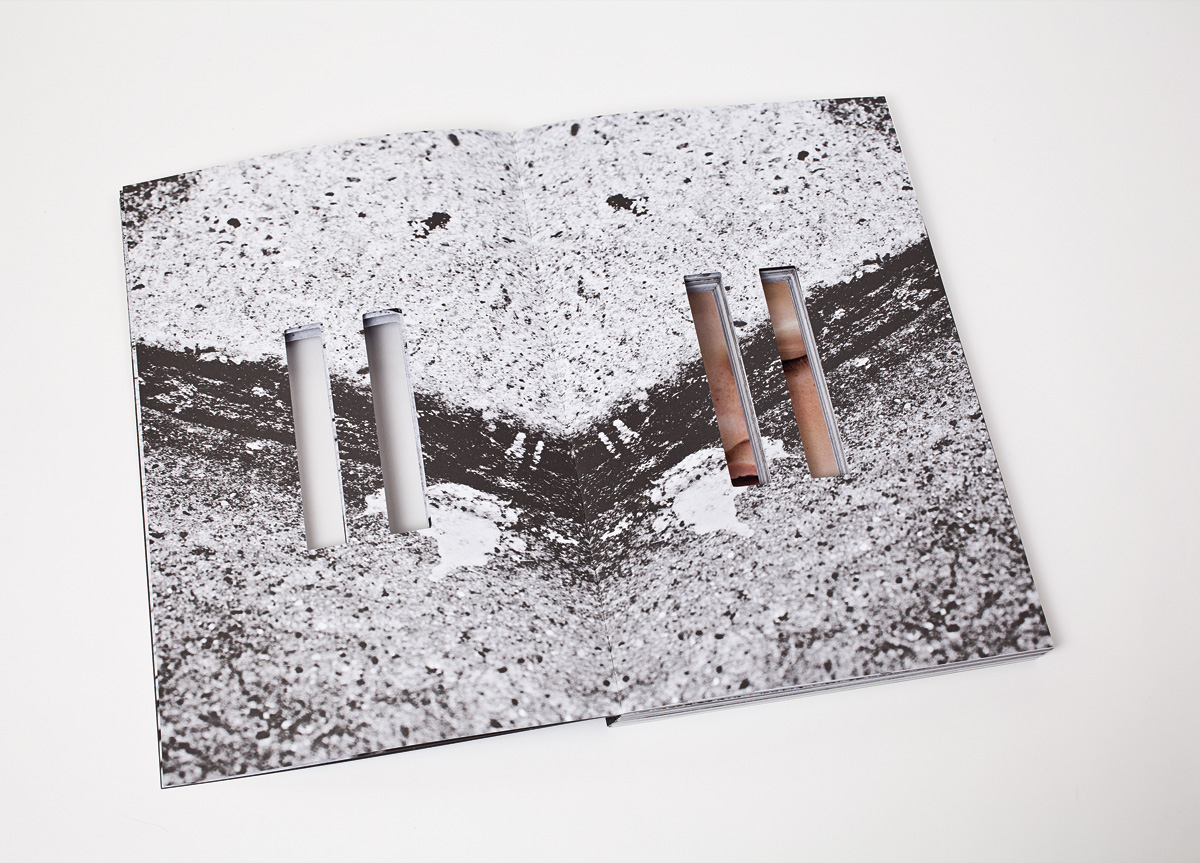 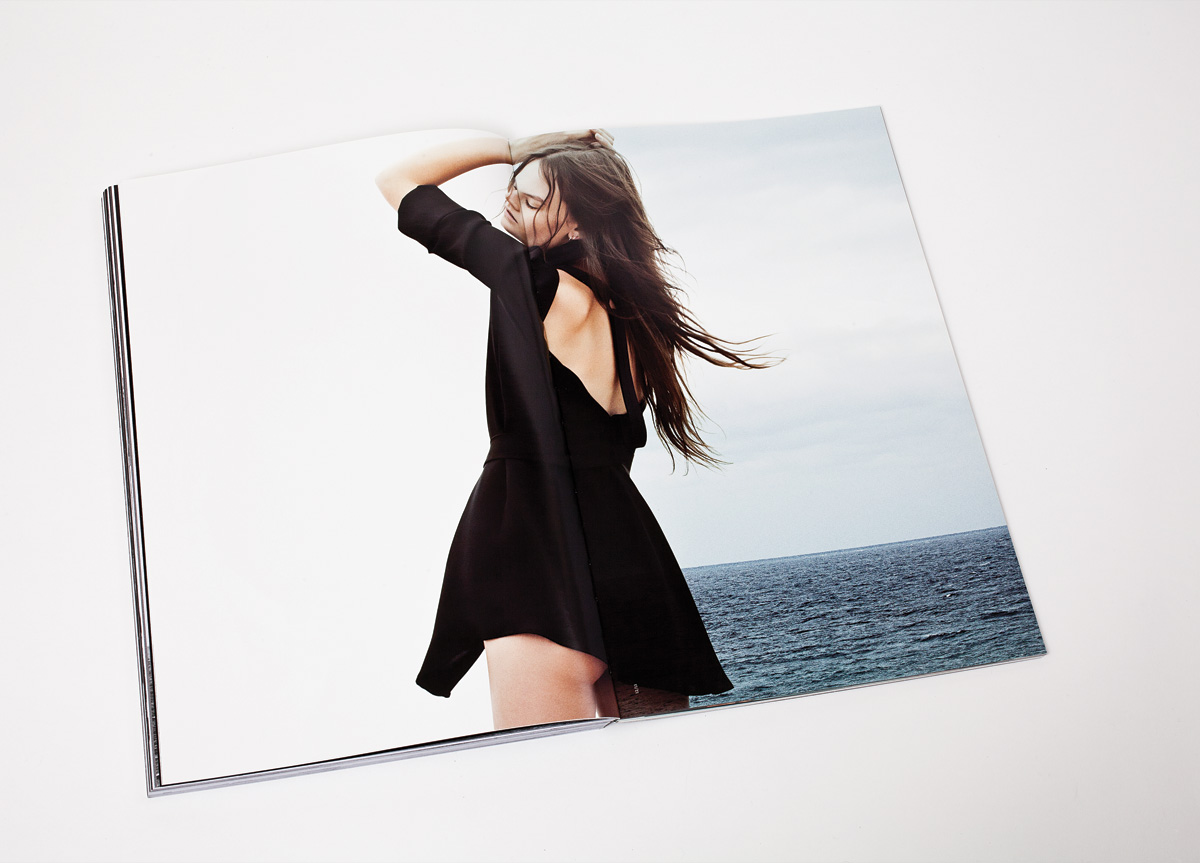 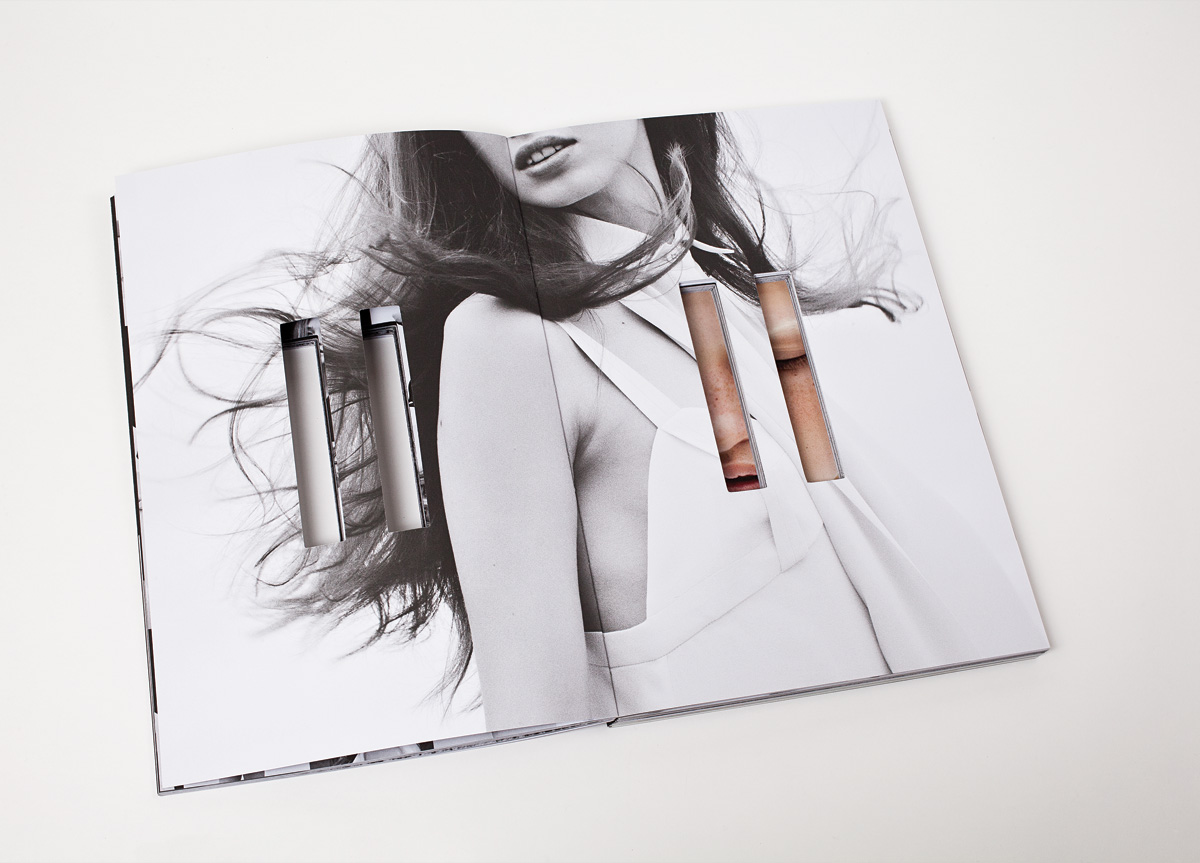 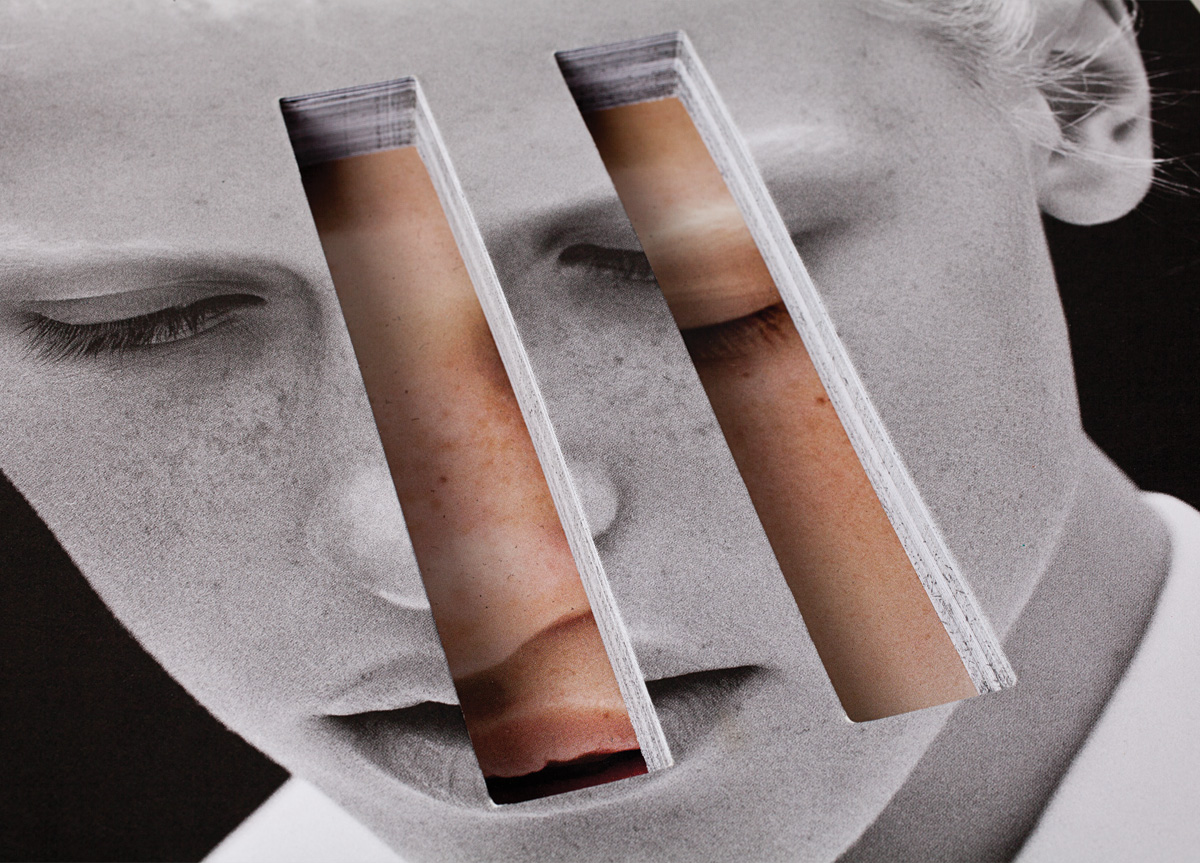 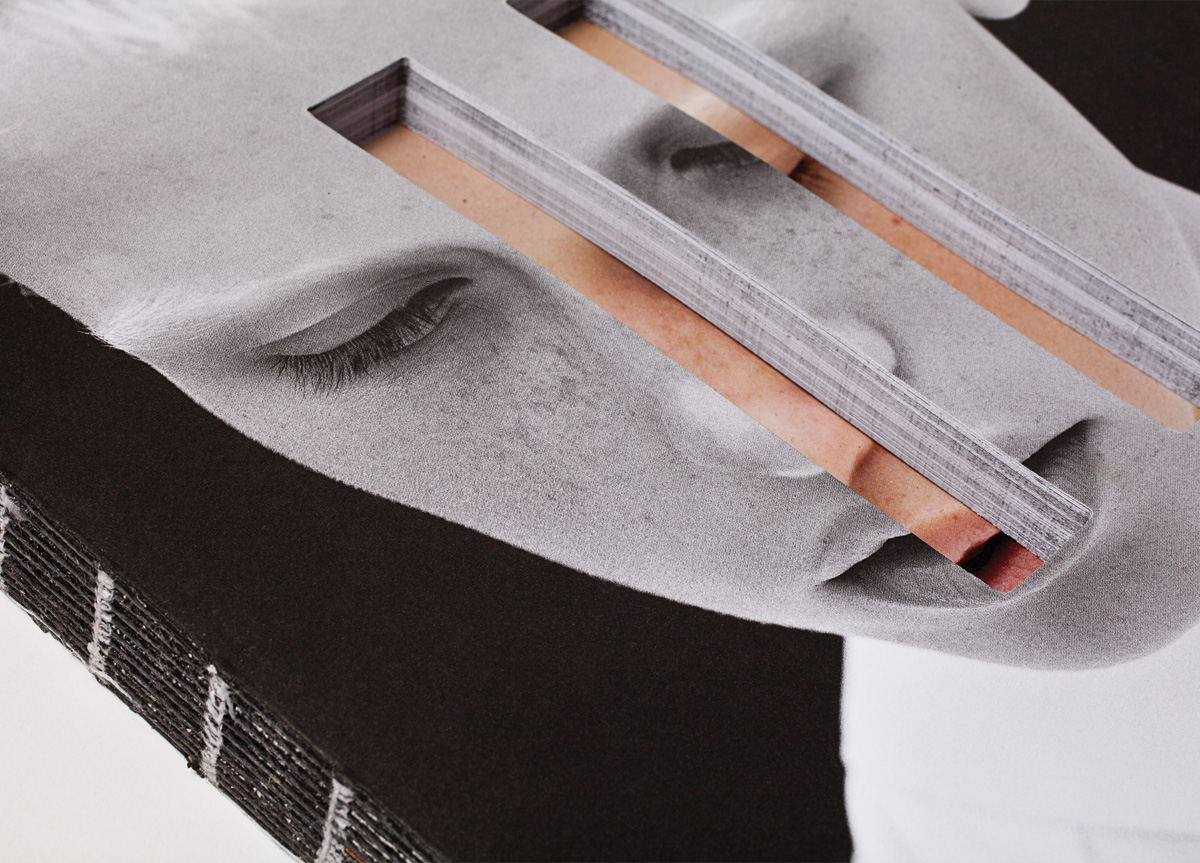 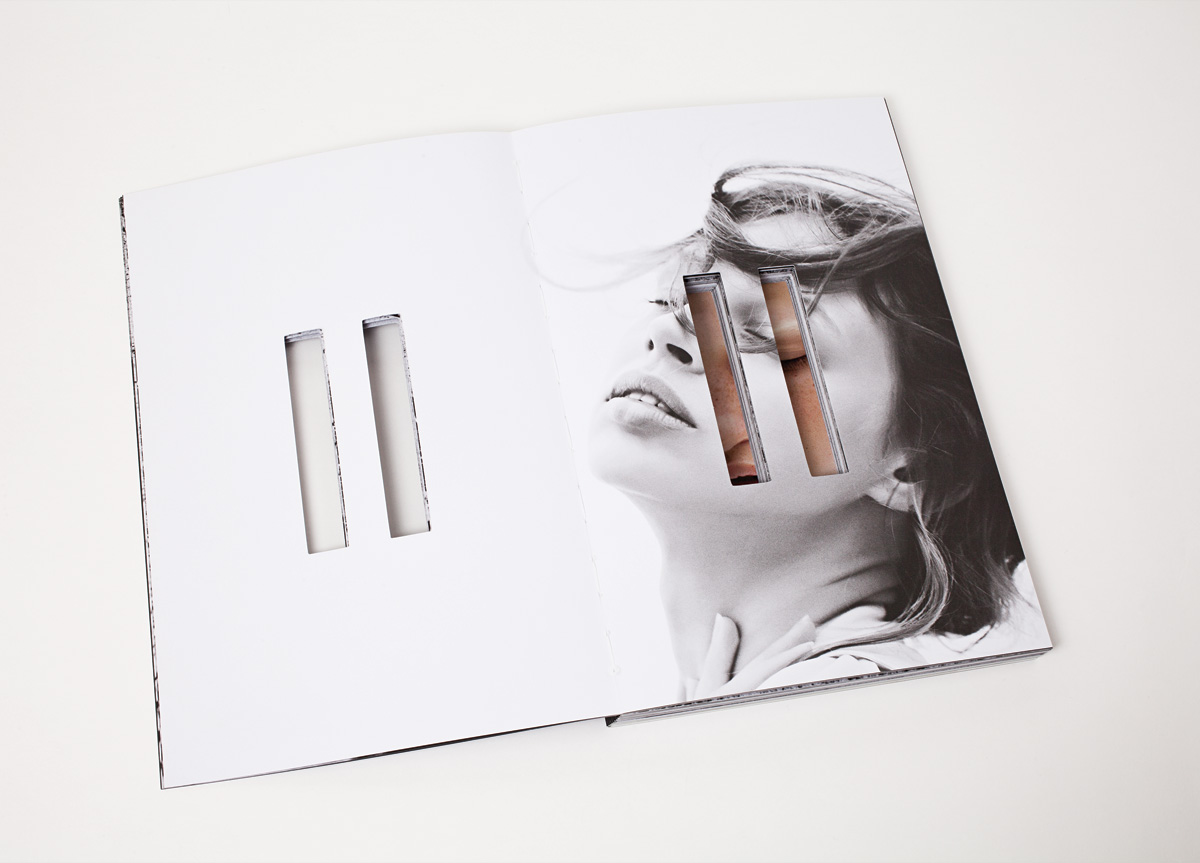 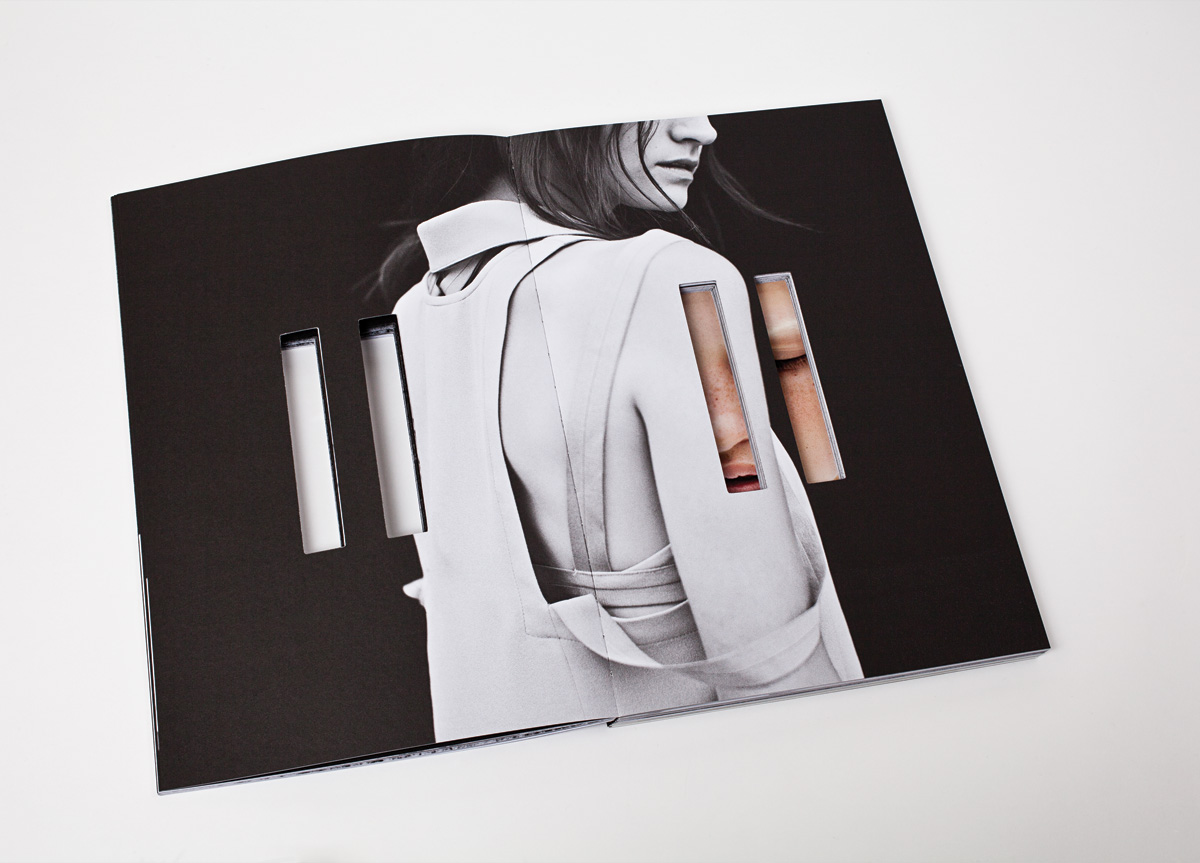 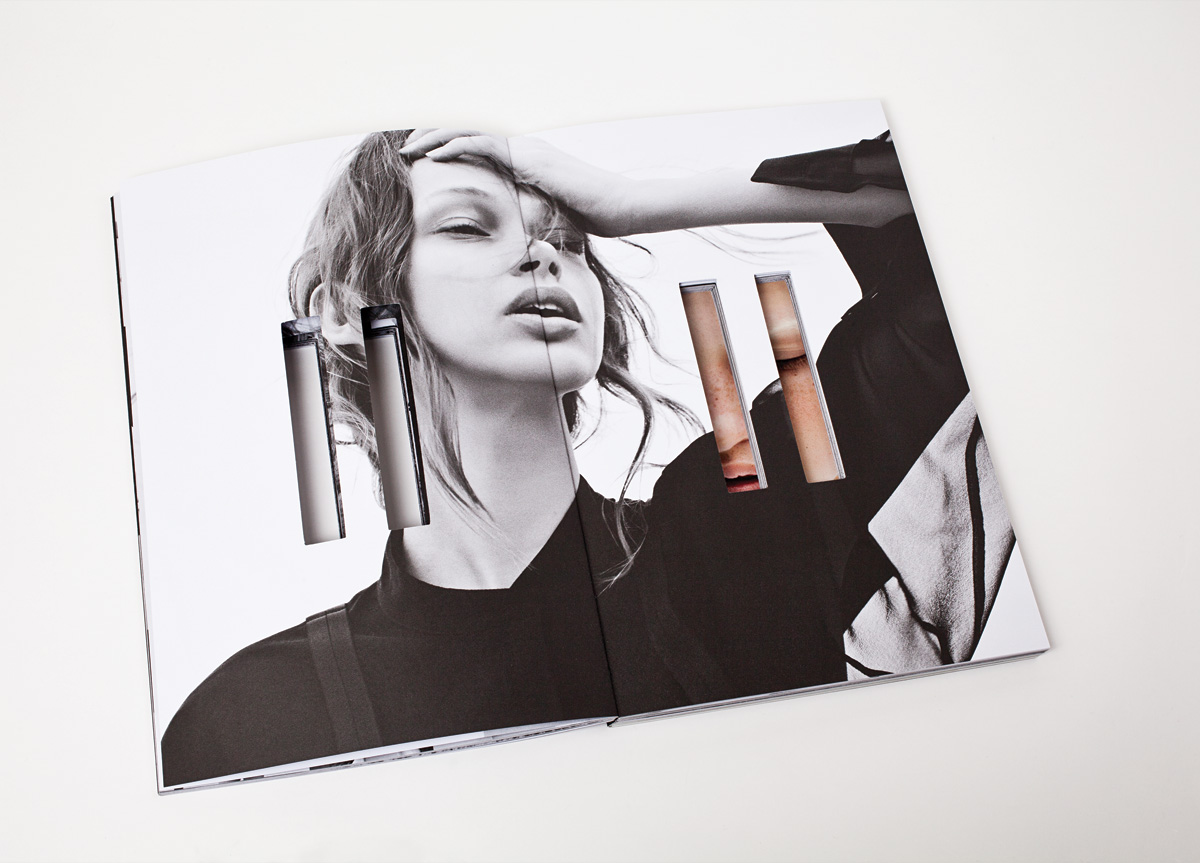 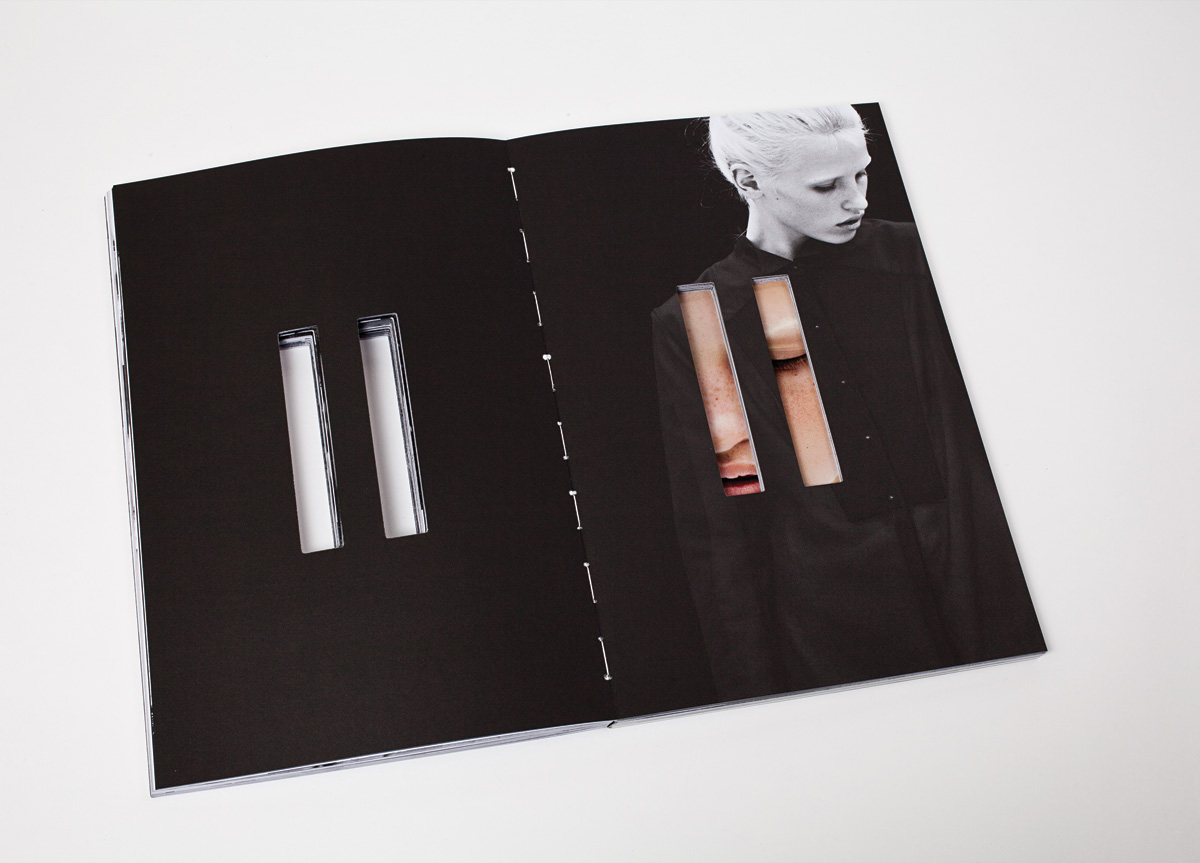 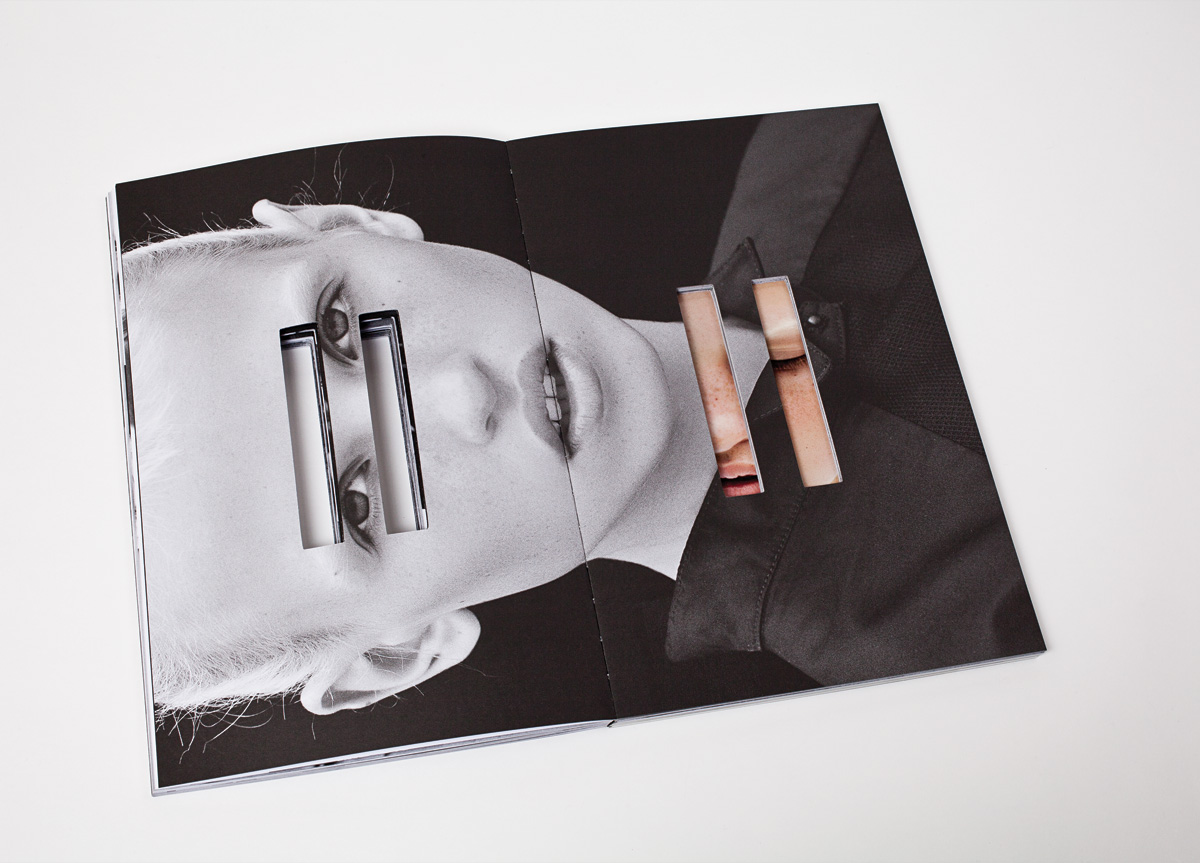 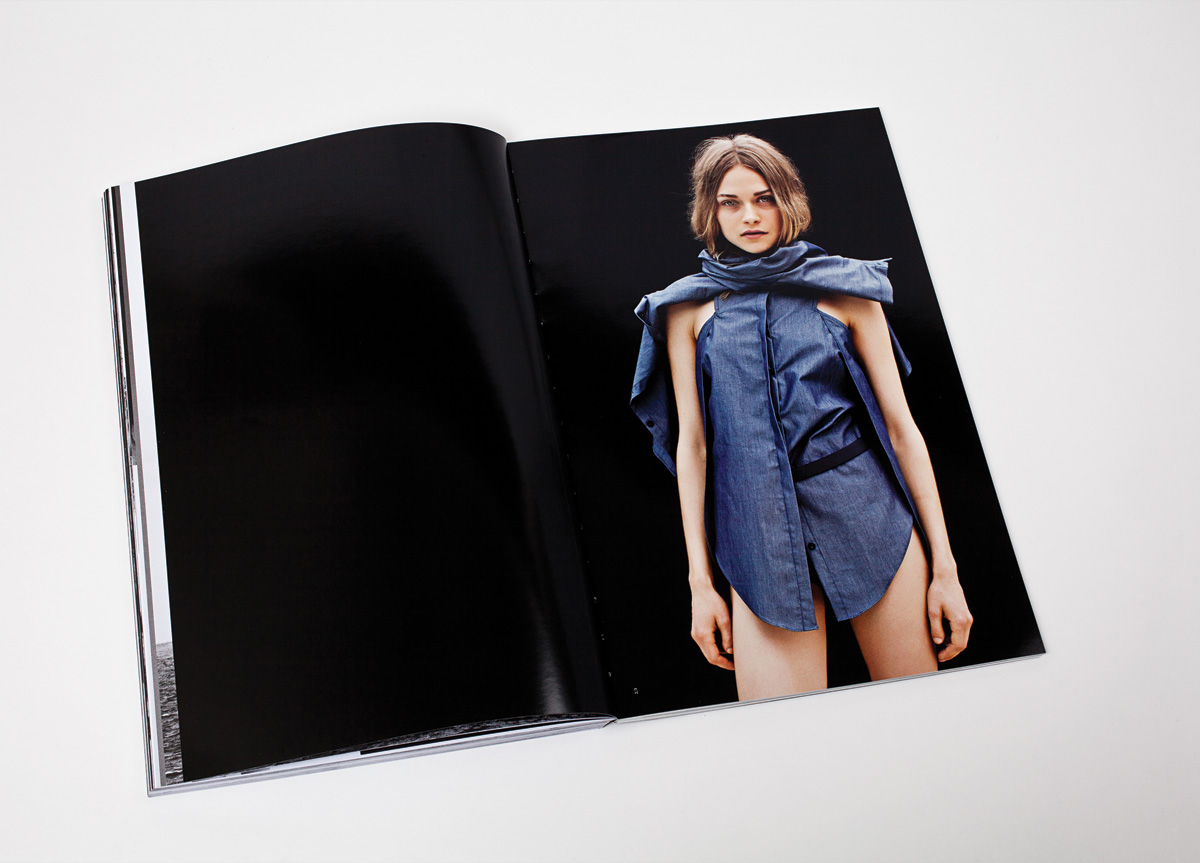 Dion Lee is one of Australia’s most promising up and coming fashion designers. At just 26 years old he has seven collections, two standout shows at Mercedes-Benz Fashion Week Australia, and his international debut at London Fashion Week under his belt.

Dion Lee wanted to mark the launch of Line II—his second clothing line—with a book that worked as a branding and sales piece. In contrast to his directional mainline collection, Line II was to be a series of wearable essentials defined by functional hardware and cut-away silhouettes.

Models were photographed wearing the same or similar garment in succession to demonstrate the collection’s ability to be reinterpreted and recontextualized by the wearer. The die-cut bars were an integral part of the concept, they divided the publication into two sections, and served as a strong branding vehicle by forcing the reader to interact directly with Line II. The juxtaposition of images viewed through these bars also provided a sense of subversion befitting the Dion Lee aesthetic.

PRODUCTION LESSONSThe largest production challenge was the die-cut that punches through the 112-page section—the proportion of the cuts caused the die itself to buckle and eventually explode when the necessary pressure was applied. We had one copy of the book, with an imperfect set of cuts, for our client’s initial sales appointments. Thankfully our printer was determined to complete the job, and they spent two weeks refining the cutting process to deliver the final publication.

Judge's Comments
Everyone marveled at the perfectly die-cut cover that manages to go through only half of the thickness of the book. How did they do it? This is restrained elegance at its best. — Louise Fili

The gorgeous photography in tandem with the stunning registration on the punched elements makes this piece a stand-out. — Mig Reyes

Watching the reaction to this entry from the 2 judges with print production background was a lot of fun. — Robynne Raye

The production challenge of die-cutting this! Trying to figure out different ways they could have cut it had me talking about it most of the afternoon. — Ben Levitz