You’re looking at one of the…

A graphic design firm generating its own projects, initiatives, and content while taking on limited client work. Run by Bryony Gomez-Palacio and Armin Vit in Bloomington, IN.

During 2013 and 2014 we ran a little publishing experiment of doing a quarterly publication featuring the most interesting, relevant, and simply fun-to-see projects published each quarter across our network of blogs: Brand New, FPO, Art of the Menu, and Quipsologies. The idea was to take the linear, chronological, same-image-size nature of the blogs and pour the content into freer layouts with small images, large images, huge images, playing with placement and pace, and providing a new way to experience the work shown on the blogs.

A big aspect of the project was to create a tangible, memorable object that wouldn’t cost us a fortune to produce. The body of the publications — between 48 and 56 pages — were printed at Newspaper Club in their “mini” size, which yielded an approximately letter-sized magazine and took care of the binding. The problem was that, being newsprint, it felt rather vulnerable so, as covers, we came up with a complex plan. First, we approached a few offset, silkscreen, and letterpress printers we knew to provide us with some of their make-ready sheets which are usually thrown away and often contain great misprints or, even better, multiple misprints layered one on top of the other created while a print job gets under way. Second, we (or they) trimmed them to size and scored. Third, we created rubber stamps for each issue, and hand-stamped 500 covers per quarter using different inks — red, white, black, and silver — to contrast against the unpredictable artwork on the covers. The final step, was securing the covers to the bodies with an oversize red rubber band that we ordered by the pound. Minimum 25 pounds per order.

The first quarter we did this, it took us multiple days to get everything done. By the last issue, we could do it in a single day. 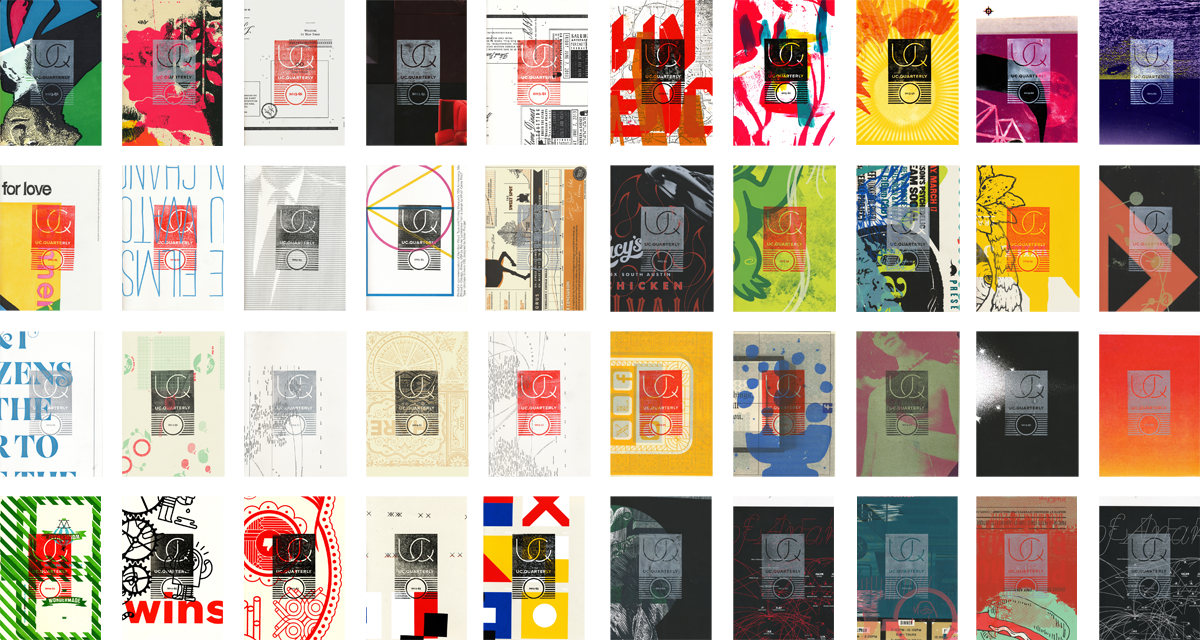 Over the course of two years we received make-readies from Rohner Letterpress, Classic Color, Doe Eyed, Magnificent Beard, Industry Print Shop, Facebook Analog Research Lab, Workhorse Printmakers, Studio on Fire, and The Half and Half. They are awesome people.

The inside of each publication was a blast to work on, arranging images at fast speed by working within a limited grid that allowed us to produce pages fast, change things around, and, above all, make sure there was no single bit of white space left. Other than the gutters and vertical margins between images, everything had to be covered. Projects were presented in no particular order and without explanatory text—just their title, credit, and a bit.ly link that referenced the original post on the appropriate blog.

At an average of 52 pages per issue, we laid out over 400 pages. Below are some sample spreads and if, for some reason, you want to see more, you can browse our Flickr albums for anything that starts with “UC.Quarterly” and we still have the sales site up for it, that breaks it down issue by issue.